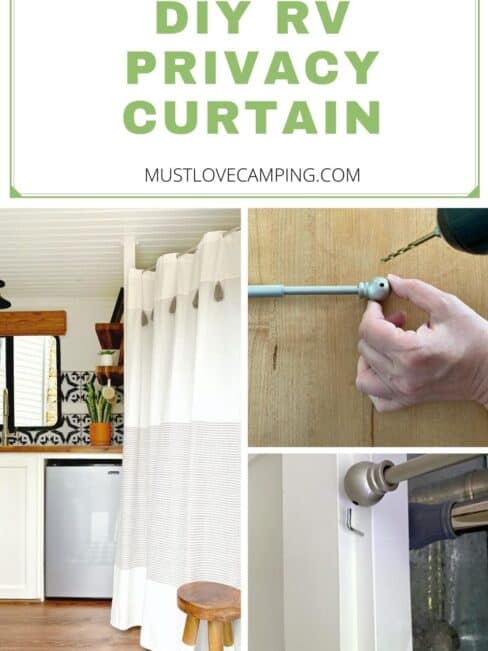 A DIY RV privacy curtain that is easy to make with a swing arm curtain rod.

We had big plans for our cargo trailer bathroom when we were planning it out. It wasn’t too long after we started the build that we found out that the best laid plans don’t always work out.

One of our earlier ideas was to put a swinging door on the bathroom to completely close it in. We even went so far as to frame it all out.

Once we had taken the camper out a few times, we realized that a swinging door just wouldn’t work in our small space.

For one thing it would cut down on the floor space in the bathroom and kitchen. It would also block much needed air from getting into the space (that tends to get warm).

After we realized a door wouldn’t work we finished the molding around the bathroom and painted the wall. We figured that once we started camping more we would come up with a solution.

Well, it took some time but I finally found an easy fix. Not only does it give us a bit of privacy when using the bathroom but it hides the toilet from view when you open the door.

We had a lot of suggestions and opinions about accordion doors from people watching our YouTube video (boy, oh boy did we have a lot of opinions).

It is a good idea, and one that we had tossed around, but we didn’t even have room for that.

Instead I came up with an easier, and inexpensive, way to add privacy.

I already had a decorative shower curtain hanging on the shower so my idea was to use that with a swing arm curtain rod.

The opening for the shower and the bathroom itself happens to be the same so using the curtain would cover both openings.

As an Amazon Associate and member of other affiliate programs, I earn from qualifying purchases.

Now that I figured out what I wanted to do, I had to make sure that it would all work.

I ordered a swing arm curtain rod and once it was delivered, I hung it in the shower.

Once the curtain rod was hung, I had to find a way to secure it when we needed to swing it over to cover the bathroom opening.

I found a square bend hook in our stash and screwed it into the wall that separates the bathroom and kitchen.

I used my drill and carefully drilled a hole in the curtain rod finial (without going through the other side).

Next, I put the curtain rod back up and hung the shower curtain on it.

I carefully swung it over to the bathroom wall and hooked it onto the square bend hook.

It worked (much to Roger’s surprise)!!! When will he ever learn to not question my ideas? LOL

It did exactly what I was hoping it would do…gave us privacy and hid the toilet.

We don’t have a ton of room in the bathroom when the curtain is drawn but there’s enough. Plus I can open it easily so that the air flows to that part of the RV.

I took the rod off the hook and swung it back in front of the shower. It hung a little droopy so I added another square bend hook in the shower frame molding and hooked it on.

Now it stays put even when we’re traveling.

Truthfully, we keep it open most of the time but it’s really nice having that privacy when we need to use the bathroom.

It’s not solid like a door but it’s the best solution for this tiny RV bathroom space.

Check out more of our RV posts… 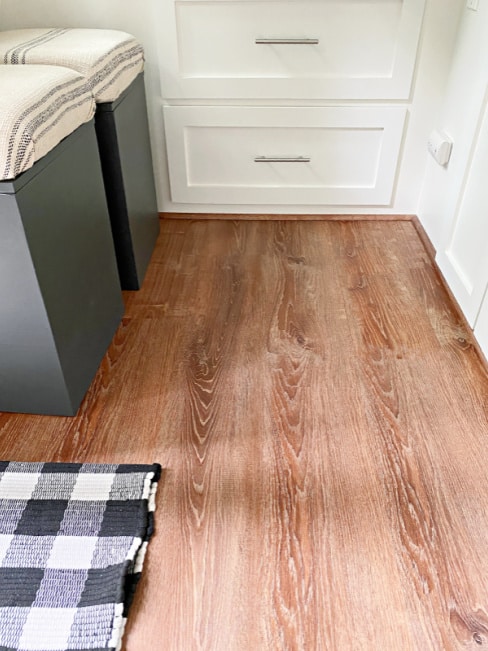 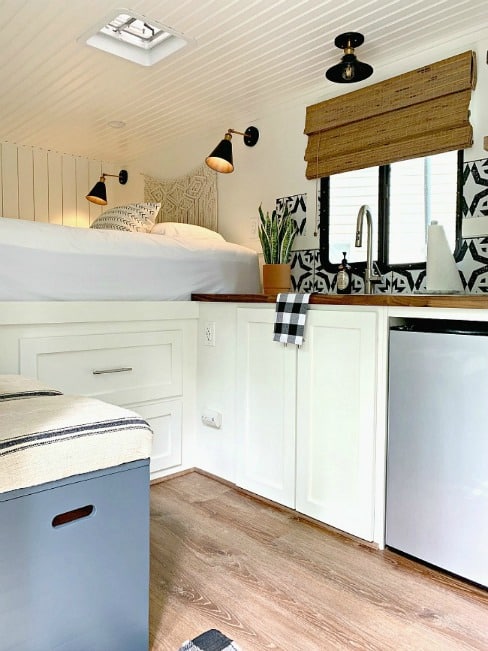 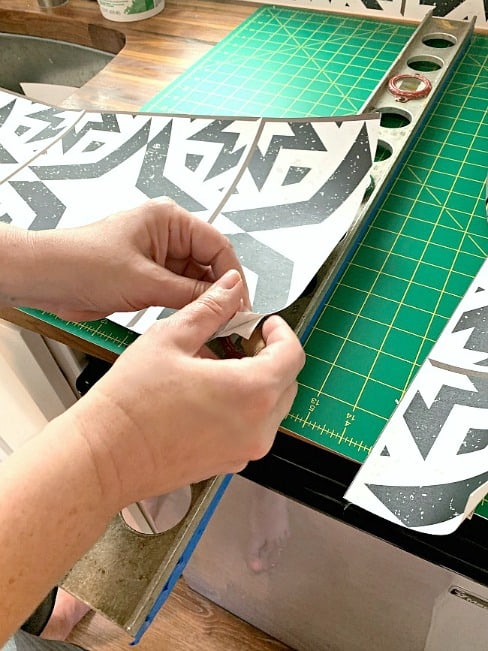 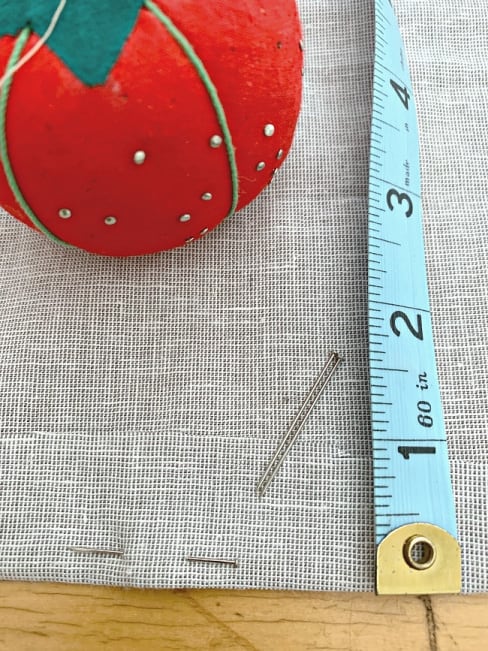 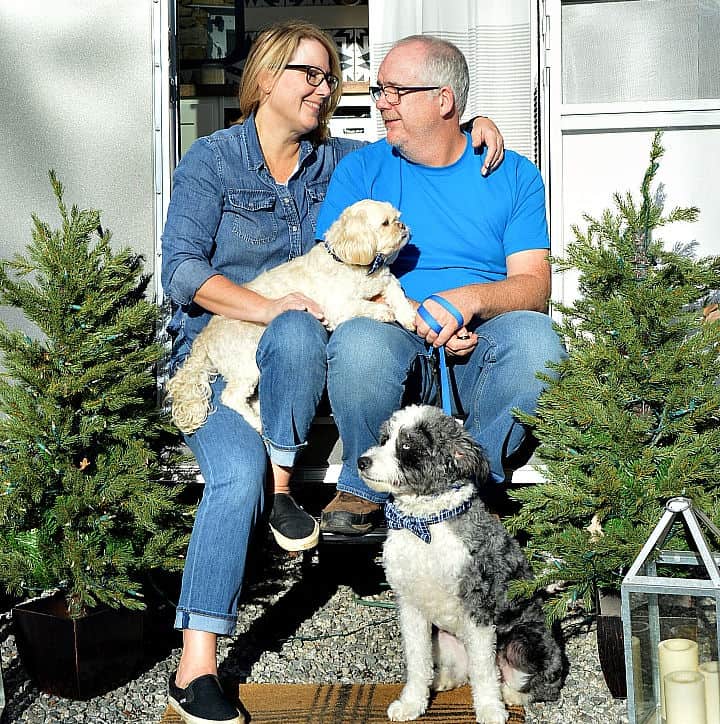 We both grew up camping and met when we were teens, camping with our families. All these years later we still love camping and sharing the tips that we’ve learned. We even built our very own RV…from scratch. 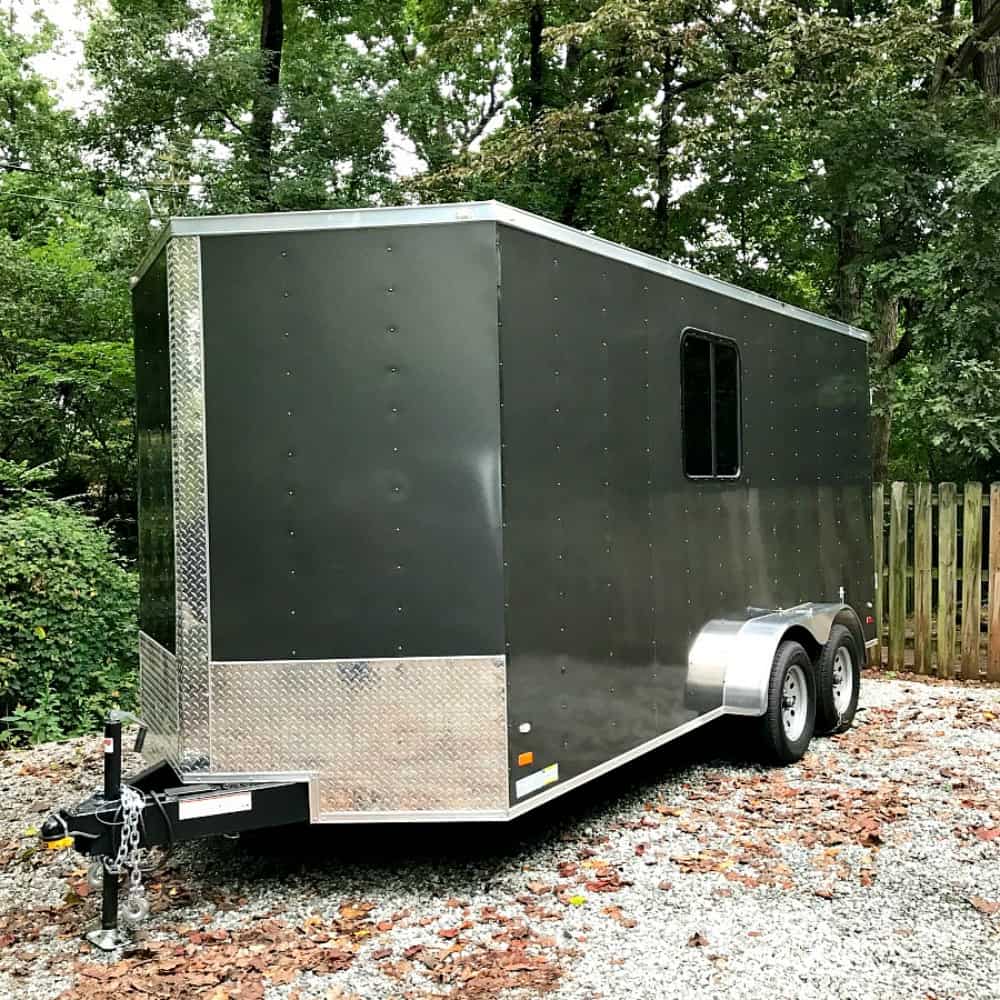 Check out our Cargo Trailer Conversion on our YouTube channel – over 800K views!